Archbishops Williams and Duncan worshipping together 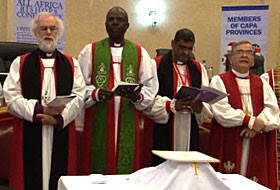 Archbishop Robert Duncan was included with the other Anglican primates during the opening Eucharist, and shared in the distribution of communion, as did the Archbishop of Canterbury, Rowan Williams.


Bishops from all of Africa as well as Anglicans from around the world are meeting together in Entebbe, Uganda, for the Second All Africa Bishops Conference August 23-29.

The conference, which is organized by the Council of Anglican Provinces of Africa (CAPA), calls together bishops and archbishops from 400 dioceses in Africa. Invited guests from around the Anglican world are also present.

Archbishop Williams told the gathered bishops that the 21st Century may well be the “African Century.”

Archbishop Duncan, as well as Archbishop John Chew of Southeast Asia, have also been invited to sit with the primates of the Council of Anglican Provinces of Africa (CAPA) during their meetings.

To learn more about this important meeting, visit the conference website.

This site is dedicated to providing a place where the Trinity Church Community and other interested folks can come and share in a look at the important events, ideas and happenings of the day, especially those affecting us as a church family. Enjoy your visit. Your comments are helpful and visit often to see what is new.