Assistant Bishop for the Diocese of Pittsburgh


Bishop Frank Lyons, bishop of Bolivia for the last eleven years, will be supporting Archbishop Robert Duncan in overseeing clergy and congregations. 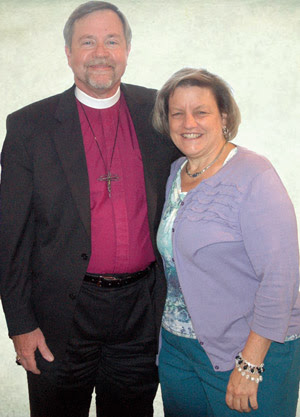 Bishop Frank Lyons has been called by Archbishop Robert Duncan, and with unanimous support from the Standing Committee, to serve as Assistant Bishop in the Diocese of Pittsburgh. As Assistant Bishop, Lyons will assist with pastoral care and oversight to clergy and congregations in the Diocese of Pittsburgh during Archbishop Duncan’s tenure as archbishop. Bishop Lyons will also exercise a special superintendence of diocesan congregations located beyond the Pittsburgh area.

“We are delighted to welcome Bishop Frank and his wife, Shawnee, to the Anglican Diocese of Pittsburgh. Bishop Frank is a highly capable leader who brings with him a wealth of experience. I am confident that he will provide the support our clergy and congregations need during this amazing period in our life together as a diocese,” said Archbishop Duncan.

During his eleven year tenure as bishop of Bolivia, Lyons has seen that very small diocese triple in their number of churches and ordained clergy. Bolivia is the poorest country in South America. During the crisis in the Episcopal Church, Lyons also assumed responsibility for 40 congregations across the U.S. and their clergy. “Bishop Frank’s spiritual sensitivity, cross-cultural experience, and passion for the Gospel will be a wonderful asset to our Leadership Team,” said Canon Mary Hays.

Bishop Frank and Shawnee will be relocating to Pittsburgh this summer. He will begin functioning as Assistant Bishop on August 1. The new position is being funded chiefly by investors from outside the Diocese of Pittsburgh who want to support Archbishop Duncan in his dual capacity as Diocesan Bishop and Archbishop of the Anglican Church in North America.

Bishop Frank is a graduate of Wheaton College and holds four graduate degrees from Wheaton Graduate School, Nashotah Theological Seminary, Fuller Theological Seminary, and Carey Theological College. He and his wife have served as overseas missionaries with Society of Anglican Missionaries and Senders (SAMS) for 25 years. Bishop Frank and Shawnee have five biological children and two adopted Bolivian children.
Posted by Fr Scott on 3/29/2012 11:16:00 AM No comments:

March 27, 2012
By Ann Rodgers / Pittsburgh Post-Gazette
The congregation of St. David's Anglican Church in Peters will hand over its property, its name and its debt of nearly $1 million to the Episcopal Diocese of Pittsburgh and start over in a former Catholic church in Canonsburg.
The move is the latest in a property dispute between the Episcopal Diocese of Pittsburgh and the rival Anglican Diocese of Pittsburgh. The diocese split in 2008, with a majority leaving the Episcopal Church for the theologically conservative Anglican Church in North America.
St. David's is among a number of Anglican congregations whose deed was held by the Episcopal diocese, which had guaranteed bank loans for a $3 million construction project in 2002. Although the Episcopal diocese had announced a plan to negotiate over the property of such parishes last year, talks have been on hold while the diocese completes a strategic planning process.
The 250-member congregation was paying $10,000 a month on a remaining $990,000 mortgage, which will now become the responsibility of the Episcopal diocese.
"The congregation was very interested in trying to reach a negotiated settlement but was unable to do so. It wasn't that they were happy to be dumping this [debt] on the diocese. They tried to negotiate and were unable to do that successfully," said David Trautman, spokesman for the Anglican Diocese of Pittsburgh.
"We couldn't wait any longer," said the Rev. David Wilson, rector of St. David's since 2008.
The vestry, or lay governing board, voted unanimously March 19 to take the step, and the congregation upheld the decision Sunday, he said. They expect to hold their first service as Christ the Redeemer Anglican Church on May 27 at 10 a.m. in the former St. Genevieve Church in Canonsburg.
The congregational vote ended with the hymn "It is Well With My Soul," Rev. Wilson said. "The meeting was solemn, there was a mixture of resolve and sadness," he said.
"People wanted to do the right thing and were excited about doing the mission of the church instead of dealing with all the conflict and litigation. There was a great relief and release from that," he said.
The move is considered temporary, as most of the congregation intends to return to Peters when it can find a suitable property, he said. However, a daughter Anglican congregation will remain in Canonsburg, where there is also an Episcopal parish.
Rich Creehan, a spokesman for the Episcopal diocese, said it was prepared to take over the mortgage but had asked the congregation to remain where it was until the strategic planning process was completed.
He said the Episcopal diocese wished the congregation well in its new location.
"The Episcopal Diocese of Pittsburgh will cooperate with those affected by this transition and looks forward to an amicable process that has marked the return of other properties to the diocese," he said.
Posted by Fr Scott on 3/27/2012 09:13:00 PM 1 comment:

"Year of the Bible" Illegal?


Atheists sue Pennsylvania for declaring 2012 'Year of the Bible'

HARRISBURG, Pa. –  A national atheist and agnostic group is suing Pennsyl21vania lawmakers for passing a resolution that declares 2012 as "The Year of the Bible."

MyFOXphilly reports the Freedom From Religion Foundation (FFRF) filed a federal lawsuit on Monday arguing that the Pennsylvania House's declaration is unconstitutional.

The resolution, which was authored by State Rep. Rick Saccone, passed unanimously in January.
The lawsuit names Saccone as one of three plaintiffs, and claims the resolution is tantamount to the state endorsing "state-sponsored religion."

They also claim to take issue with content in the Bible, including "violent, sexist and racist models of behavior that FFRF members find personally repugnant."  "(This content) potentially could encourage persons who rely on them to act in a manner harmful to them and others," the lawsuit claims.

Saccone has said the resolution is meant to recognize the impact the Bible has had on the U.S. and on the state, and does not inhibit anyone from believing or not believing in any faith. "Most citizens don’t remember that a joint session of Congress passed a similar resolution signed by President Ronald Reagan on February 3, 1983, declaring that year as the Year of the Bible in America," Saccone said.

In February, Democratic Rep. Mark Cohen said he wanted to reconsider the resolution, and that he regretted that he didn't realize the resolution's content at the time of the vote.

Boko Haram declares “war” on Christians in Nigeria and threatens to eradicate them from parts of the country
Militant Islamist group Boko Haram has declared “war” on Christians in Nigeria, saying that they are planning coordinated attacks to “eradicate Christians from certain parts of the country”. The threat was made by a Boko Haram spokesman on Sunday (March 4, 2012), and the group’s unrelenting campaign of anti-Christian violence since Christmas indicates that it is no idle one. In the wake of numerous church bombings and attacks on individuals, Christians have been fleeing the North in great need and the Church there could be wiped off the map.

You knew it was only a matter of time.

Christians have rejected the claim by two medical ethicists that killing newborn babies is no different to abortion.

Posted: Thursday, March 1, 2012, 18:48 (GMT)
In an article published in the Journal of Medical Ethics, Alberto Giubilini and Francesca Minerva argue that newborn babies do not have a “moral right to life” because they are not “actual persons” but rather “potential persons”.
“The moral status of an infant is equivalent to that of a fetus in the sense that both lack those properties that justify the attribution of a right to life to an individual.”
They continued: “Both a fetus and a newborn certainly are human beings and potential persons, but neither is a ‘person’ in the sense of ‘subject of a moral right to life’.
“We take ‘person’ to mean an individual who is capable of attributing to her own existence some (at least) basic value such that being deprived of this existence represents a loss to her.”
The article, entitled “After-birth abortion: Why should the baby live?”, argues on these grounds that ‘after-birth abortion’ should be “permissible in all the cases where abortion is, including cases where the newborn is not disabled”.
Nick Pollard, co-founder of The Damaris Trust, criticised the claim.
“Some of us have seen this coming for a long while," he said.
"It stems from the way that many secular humanists draw a fundamental distinction between a ‘human being’ and a ‘human person’ – they argue that some human beings are not proper people and therefore it is not morally wrong to kill them.”
Dr Trevor Stammers, director of medical ethics at St Mary’s University College, said: “The term ‘after-birth abortion’ is just verbal manipulation. That is not philosophy. I might refer to abortion henceforth as antenatal infanticide.”
Dr Peter May, a Christian ethicist and retired GP, said that childbirth did not mark a change in the intrinsic worth of a child.
“The same child now exists in a new environment,” he said.
“Secular humanists may want to embrace infanticide. Jesus however taught that the Kingdom of God belongs to such as these.”
Posted by Fr Scott on 3/02/2012 03:13:00 PM No comments:

Why Israel Must Be Prepared to Strike Iran

The US Press seems more and more sympathetic to Islamic nations and less and less patient with Israel.  Some wonder why Israel is threatening to strike Iran's nuclear facilities.  I ran across this quote from the current prime minister of Israel that clarifies the issue from the standpoint of the Jewish people.  As late as 1939 or 1940 the world's leaders did not want to believe that Hitler intended to take over the world or destroy the Jewish people.  they thought he could be managed.  Here is what Mr. Netanyahu said:
“Seventy-five years ago, the leading powers in the world put their heads in the sand,” Mr. Netanyahu said then. “Untold millions died in the war that followed. Ultimately, two of history’s greatest leaders helped turn the tide. Franklin Delano Roosevelt and Winston Churchill helped save the world. But they were too late to save six million of my own people. The future of the Jewish state can never depend on the good will of even the greatest of men.
Posted by Fr Scott on 3/02/2012 10:42:00 AM No comments:

This site is dedicated to providing a place where the Trinity Church Community and other interested folks can come and share in a look at the important events, ideas and happenings of the day, especially those affecting us as a church family. Enjoy your visit. Your comments are helpful and visit often to see what is new.